For this week’s Book Nook I decided to take a quick foray back into teen lit. The Goddess Test by Aimée Carter is the first book of a series. Unlike most popular teen fiction, this book does not contain vampires/werewolves, or a dystopian society. The book follows a girl named Kate who moves from NYC to a small town in Michigan for her very sick mother. It soon turns out this town is not all that it seems. She meets Henry who turns out to be Hades, god of the underworld. After an incident that leaves one of Kate’s classmates dead, Henry promises to bring back her classmate in exchange for her staying with him for half of the year. During this time she must pass seven tests, in return she will become immortal and her mother will be kept alive. However, all the girls that have tried before have ended up dead. 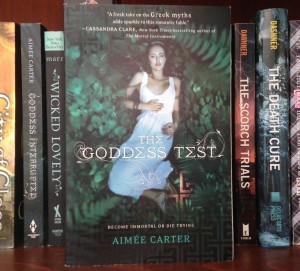 This book originally caught my eye because it incorporates a lot of the stories of the Greek gods within the chapters. I personally love Greek myth so any books pertaining to the subject are of particular interest to me. I loved this book. It had a great and consistent story line, and you end up falling in love with the characters. The second book in the series (Goddess Interrupted) is also a great read. I haven’t read the third book in the series, but it’s on my future reading list. If you’re looking for a book that contains teen fiction, greek mythology, a bit of mystery, or just a good storyline then I suggest giving this book a try.